Due to impending AP/IB tests and baseball season’s incredible ability to take over every possible second of free time, the President Henry blog has been unfortunately quiet over the past several days (weeks, months, I don’t even remember the last time I wrote something worth posting). However, several exciting events have necessitated the return to dumping my thoughts onto the internet.

My school’s orchestra and chorus departments recently trekked to New York for WorldStride Heritage Festival music whatchamathingy. Despite the WorldStride organizations failure to put together an awards ceremony that can be describes as anything more than painfully slow, the performance part of the trip was pretty fun, and our school ended up winning the overall festival award for combined scores for any of the 15 plus schools there, which included a french speaking school from Canada (which happened to be the school I borrowed bass rosin from. Coincidentally, the french word for bass rosin is not bass rosin, so that was an interesting conversation) and the high school from Port Angeles Washington, which is a two hour bus trip and then a six hour flight from New York. Talking to those guys (knowing where Port Angeles is happens to be a great conversation starter, because most people assume its a neighborhood in DC) made the 3.5 hour bus trip from Arlington seem nice.

The other part of the NYC trip that was really fun was just having time to wander around and eat a lot of food, so depicted in review form in this video: https://www.youtube.com/watch?v=lks-J98Pc_g . The video, by the way, has an extended intro, because I was coming up with movie intro ideas. Feel free to skip to 58 seconds. 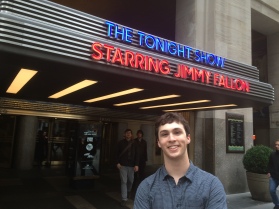 Because I believe in America, I decided to run against two-term incumbent Mo for senior class president. Despite several different excellent campaign slogans, like “just say no to chairman mo” and “a small amount of change you can believe in”, it does seem unlikely that I will beat Mo (damn you incumbency advantage), though I am looking forwards to the appearing-on-the-morning-annoncements part of the speech.